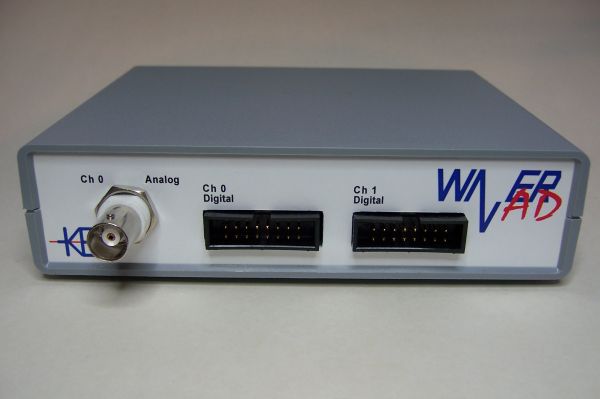 ... is a USB Peripheral for Windows PCs

This makes WaverAD flexibly usable in the lab or on a Laptop in the field and allows an intuitive user interface, while keeping costs of the system low. A PC is in every lab...

With the flexible Waveform Designer in the PC software, this allows generation of periodical analog signals between 1/10 Hz and 50MHz or logic patterns with a bit rate of up to 100MHz.

5,0V and 3.3V are the two basic logic levels enabling signal generation for most logic devices. If more options, than those two levels are needed, WaverAD can be easily extended by hardware modules. More to this topic, see below.

This enables the user to store 8 different signals on the device (e.g. square wave, triangle wave, sine wave, ...) and switch between them while the signals are being "played". The user is no more limited to the single waveform, that was designed. The pages can be treated as individual signals or played in sequence.

... can be triggered manually or externally

All run modes (see bullet above) can be triggered in those two ways allowing operation modes from user triggered signal output to event triggered single stepping through a logic pattern.

... is extendable via external Extension modules

WaverAD is not limited as it is. The generated signals and the trigger input can be modified by extension modules. And even better: These modules can be controlled with the user interface software. An best of it: The control interface to the extension modules is documented. With some hardware expertise (which a user of a signal generator should have) each user can build own extension modules, which can be controlled by the given user interface. Imaginable Extensions could be further logic levels, complex trigger patterns, controllable analog voltage amplifier,...

... is controlled via an intuitive Software-Interface

The PC software is free of charge and can be downloaded from this website. There are no limitations to the software, except that without the WaverAD hardware obviously no signals will be output. Users can try the software and check the features and usability before they buy the hardware. The software includes a very powerful mathematical Waveform Designer, that allows the design of nearly any function, that mathematics offer. Check it out.

... can run multiple times on the user PC

You need two channels of analog signals or 32-bit of digital? Well WaverAD was in deed designed for cost, which made it necessary to limit it to one analog channel and 16-bit digital... But still no need to despair. Just have multiple WaverAD running in parallel on your PC. Each can be controlled individually through an own SW interface. And in the end, this is still cheaper than other dual-channel function-generators...

I want to buy this!

What accessories exist to WaverAD?

We use cookies
Sorry for this - we hate to have to do this as well... We use cookies on our website. Some of them are essential for the operation of the site, while others help us to improve this site and the user experience (tracking cookies). You can decide for yourself whether you want to allow cookies or not. Please note that if you reject them, you may not be able to use all the functionalities of the site.
Ok Decline
More information